Lost in the hills of FOXEN 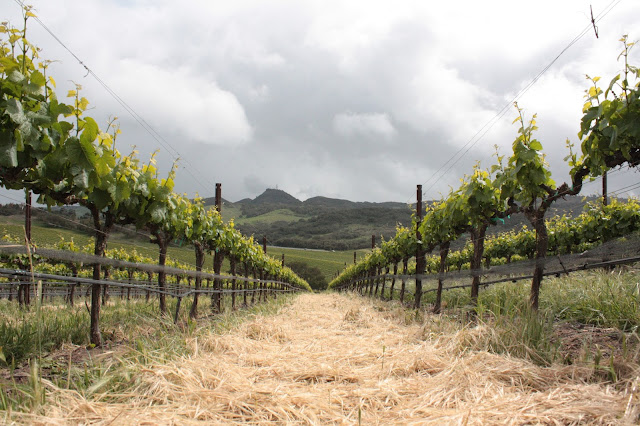 Lost in the hills of FOXEN
American Girl- by Tommie Vaughn

The adventure had begun. I was absolutely lost somewhere within the northern hills of the Santa Ynez Valley, and I must admit I was somewhat nervous as my family and I drove farther and farther into the Foxen Canyon with little to no directions as to where we were going.  My cell phone service had stopped working for only fifteen minutes, so of course I was sweating as we bumpily bumped down the road, our camper in tow bouncing wildly behind us, and I closed my eyes trying to remember the one landmark detail I had been told to look for.
The old white house. No, not thee White House, but an monument just the same in the vineyard studded Valley, this vintage whitewashed Victorian home on the left hand side of the road, where our turn would follow suit and we would continue up onto the private road of the Doré families property. We had been invited by Paul Doré, son of Dick Doré, the co-owner and co-founder of FOXEN Vineyards, who played host to this lively occasion know to the FOXEN family and friends as “May Party,” an annual celebration forty-one years strong.
Enter into the Fox’s Den
After we took our turn, climbing higher and higher into the hills, I raised my eyebrows to my husband who shook his head, mumbling something like “It’s gotta be up here somewhere.” And just like that, we rounded the corner into a large flat oak tree studded parcel with campers, tents and RV’s dotted in every direction, all seeming to surround a giant stage that was built into an even more giant savannah oak tree. String lights hung from the branches of nearby trees and long white tables with green tablecloths surrounded a massive BBQ station that was smoking with rotisserie meats. People were everywhere, talking and laughing, playing horseshoes as children played Frisbee and dodge ball in an open field. I breathed a sigh of relief as my kids cheered from the back seat. We had made it and now it was time to relax, meet the family, play some music and drink excellent wine.
The day went from worried to wonderful in about 30 seconds, as we were greeted by the charismatic Paul Doré and the lovely Jenny Williamson Doré, who handles FOXEN’s Marketing and California/Florida sales and just happens to be the wife of Dick Doré, who’s warmth and excitement I instantly loved, as she told me the legacy of this historic property. 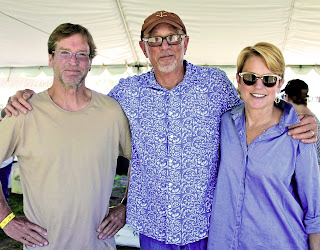 TV: FOXEN has a strong family lineage, with the land dating back to the 1800's. Can you tell me a bit about the family history, including FOXEN’S namesake William Benjamin Foxen?

JWD: The winery is named in memory of William Benjamin Foxen, an English sea captain and Dick’s great-great grandfather, who came to Santa Barbara in the early 1800s.  In 1837, this Santa Barbara County pioneer purchased the Rancho Tinaquaic, a Mexican Land Grant that originally totaled nearly 9000 acres and comprised most of what is now known as Foxen Canyon.  Captain Foxen adopted the distinctive “anchor” as his ranch cattle brand, which has become a trademark of the winery.  Benjamin Foxen and his wife Eduarda Osuna raised sheep and 14 children on the ranch. In the 1880’s, Eduarda and Benjamin’s oldest child, Ramona, married another Englishman Frederick Wickenden, and built an adobe home, stagecoach stop and a general store. The old, white wooden victorian home, that still stands today, was built around the original 2-room adobe structure built by Ramona and Fredrick Wickenden.

Eduarda’s step-father was Santa Barbara’s presidio captain and their home was where the San Ysidro Ranch is today. In fact, the family’s original adobe room is preserved by the San Ysidro Ranch today. Because of the influence of Eduarda’s father, Benjamin Foxen was able to purchase the Rancho Tinaquaic, and became Santa Barbara’s first anglo land owner. Foxen used the proceeds from selling his ship to purchase the Mexican Land Grant property.

TV: Your husband Dick Doré and viticulturist Bill Wathen are the founders and the only owners of FOXEN Vineyard and Winery. The winery has a land lease with the Doré Family. How did the two meet back in 1985?

JWD: You are correct that Dick and Bill made their first wine together in 1985, but they met years before in the late 70’s at a party and became friends then.
They founded FOXEN at the historic Rancho Tinaquaic in northern Santa Barbara County, that has been in Dick’s family since 1837.

It is very fitting that FOXEN makes its home on the 2000-acre Rancho Tinaquaic, on which the land remains in Doré family hands, who are direct descendants of Benjamin Foxen. We welcome visitors at our original tasting ‘shack’ at 7200 Foxen Canyon Road, and our new solar-powered winery at 7600 Foxen Canyon Road that was completed in 2009.

TV: What wines are Foxen's specialties? And what’s new at the vineyard?

JWD: We are best known for our Pinot Noirs and Chardonnays, but our Syrahs and Bordeaux-style wines are also some of the most highly-acclaimed wines to come out of Santa Barbara County.
Our Estate Tinaquaic Vineyard produces Chardonnay, Syrah, Cabernet Franc and a bit of Petit Verdot. It is dry-farmed, which is becoming more and more difficult in this historic drought.

TV: Your friends and family campout “May Party” has now become legend, how many years has this been going on now and how did it start?

JWD: Dick started May Party 41 years ago, and invited a few families to camp and “party”. It has grown over the years, and Dick delights in the fact that three generations of his family enjoy this fete. Three years ago, Dick turned over the hosting duties to his son, Paul Doré.

TV: Being a part of your campout gave me an insight on how strong your family ties are, and I loved seeing such strength and community between you all. Does everyone help out around the vineyard as well? I know both yourself and Bill's wife Becky Barieau work hard with the label, what about the rest of the family?

JWD: So, only Dick, Bill, me and Becky run Foxen’s winery and Vineyard activities. Actually, since last year, daughter Kaitlin manages our California sales. Bill was educated as a viticulturist, so he handles all of the farming in addition to being our winemaker. Dick and I divide the sales duties. I handle the marketing and communications, while Dick oversees the business. And Bill’s wife, Becky, is a CPA and the perfect person to be our controller. It’s a partnership that has grown and worked well for 30 years. 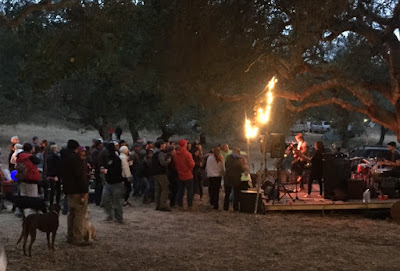 TV: What does the future hold for Foxen? Any chance of a new tasting room on the Santa Barbara Wine Trail?

JWD: With our two tasting rooms, we have our hands full and have no plans for additional tasting rooms. Sorry!

Ok, Ok so a girl can dream right? It was about this time that I was distracted by the lively music that had started up on the stage and lasted into the wee hours of the morning, featuring local darlings The Caverns and LA’s melodic mastermind Omar Velasco. (hot tip: Omar will be playing at Fig Mountain SB on Saturday May 30) It was a party to end all parties, with the friendliest family in the Valley… and you better believe I cannot wait to go back next year- bumpy roads and all. For more information on FOXEN wine and vineyards go to: FOXEN or call 805-937-4251.