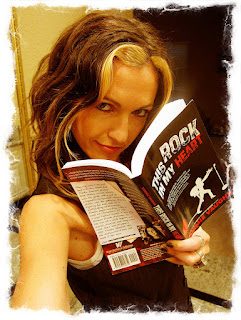 IT'S HEATING UP AROUND HERE!! A REVIEW FROM ONE OF THE COOLEST LADIES IN ROCK N' ROLL!! AND THE 'READER OF THE ROCK' FOR OCTOBER IS...

In her debut novel “This Rock In My Heart,” Tommie Vaughn offers a juicy & insightful look into the Hollywood music scene. Teetering on that fine line between fact & fiction, Tommie clearly taps into her own wealth of personal experience to give the reader a sneak peak inside the head of a true artist struggling to make it in the City of Angels.


The book’s main character, Frankie Spencer, is so down to earth & likeable. She is someone I would totally want to hang out & drink red wine with! She exudes both confidence and vulnerability as well as a natural honesty and beauty that shines through on each page. She’s definitely a rare breed in a town full of fake tits & gold diggers. If there’s one thing I learned from Frankie Spencer, it’s that it’s who you KNOW not who you blow!!

Seriously though, this book both inspires me as an artist and at the same time makes me feel nostalgic about my own days of being a struggling musician full of hope, fear & Ramen noodles. If you’re looking for a fun, lighthearted read with just enough steamy romance to keep the pages turning, then look no further. This book is definitely for you!

Go Ahead and do it... Expressing Motherhood

A good friend of mine was doing a play, or reading, or skit. I'm not sure what she called it, but she asked me if I would like to come and watch. She said it was kind of like the Vagina Monologues, except it was about Motherhood. Hmmmmmm.

Well, I thought, Motherhood starts with a vagina so this can't be too far off. She said basically the play was about real women's different stories, all about five minutes tops, on how motherhood has changed their lives. I love my friend and was very proud that she was putting herself and her writing out there, so of course I had to support.

I don't know what I was expecting, a bunch of mom's bitching about their kids, the lives they had before, the bodies that would never be the same. I mean, I'm a mommy and I know it's all true, but I guess my preconceived notion of what this show was going to be about didn't grab me right off the bat. In my life I have tried to do so much... with my music, with my writing, my art and now being a mom. Sure I bitched about some of it to my closest friends, but to a group of strangers? It didn't sound like much fun.  I don't know what I was so worried about, but it didn't matter, my friend was going for her dreams and I had to be there. I knew the piece that she was reading was super funny, as she had practiced it on me a few times, so I hoped for the best, dolled myself up and took my little ole' ass down to the Sunday afternoon show at the Banshee Theater on Magnolia Boulevard, in Burbank.

I had been double booked that day, and my husband had to go to work early, leaving me at a loss of a babysitter, but my friend assured me that she was in the first half of the show, and I could easily leave after her reading. I felt a bit guilty about it, but still I was relieved that I wouldn't be forced into two hours of this thing and I wouldn't have to miss my sweet friends performance either.

As I sat in the back row, in the closest seat to the door so I could run out of there as soon as my friend finished, I looked around the tiny theater with open interest. It was a lovely timeless theatre, seating around 60-70 people, and today it was filled with women. Women of all ages, shapes and sizes, huddled in groups of two or three, all happily chatting to each other. There were even a few men, who had expressions that seemed to mirror my own inner fears of 'Good Lord, what am I doing here?'

It was about then that I felt it. The comradery of motherhood. The comradery of women. We were a special club, that only those with stretch marks could attend. People can lecture you about how to raise a child, how to get your body, your sex drive, your relationships back after giving birth to another human being, they may even have a PhDs. on the subject... but until they themselves go through the act of pushing a watermelon out of their vagina, they don't know what the fuck they are talking about. And they are not invited in this club.

It was about this moment that I began to smile to myself as I started to flip through the program of 'Expressing Motherhood'. I learned that this show had been created by two friends, two mothers of course, named Lindsay Kavet and Jessica Cribbs back in 2008. Not too shabby, I thought. A lot of bands didn't last that long, so these girls must have been doing something right.

As I began to read about the different performers, thier biography's were indeed all so varied, from every walk of life. A few actors sure, some comediennes, my sweet friend Jaquelyn De Longe with her 'I'm a hottie mommy' photo, a lot of writers, and a handful of regular moms. The bio's were so cleverly written I had to stifle my laughter, feeling like the typical girl in the back row of class, that was always causing trouble. I started to relax and look forward to the dimming of the lights, that seemed to come immediately after I had thunk it.

The play begins with the two lovely gals who created the play, Lindsay and Jessica who welcome everyone, give back with a raffle of cool gifts, and a final word of 'relax and enjoy, someone else is taking care of your kids.' Which made the entire audience chuckle. The lights dim again and the first performer walks onto the stage.

I admit it. I loved this show. I laughed out loud. I openly cried. And was pissed as hell when I had to leave early. I actually stayed longer than I should have,  I couldn't pry myself away. I was having too much fun. The women reminded me of everything that I had feared about becoming a mother. About becoming so human that I felt everything around me, good and bad, and could no longer only focus on what I wanted, what I thought was important in MY world.

I had motherhood all wrong. I thought you lost everything when you had a child, when in truth you gain everything, and then some. Becoming a mommy to me has been the greatest blessing, that I had always thought, was not going to be a part of my chosen rock n roll life.

I had Expressing Motherhood all wrong too. I'm going back this Saturday night to watch the entire show if anyone wants to join me? If you can't do Saturday night, there is a show on Friday and two on Sunday as well, but then it's over and you will have surly missed something special. These women are brilliant, funny and real. As they bravely walk on stage and tell their five minute monologue, it gives you just a peek of what it's like to be a Mom. Without any fear of stretch marks.

Find out more information about the show here: http://www.expressingmotherhood.com/