Let's hear it for Guitars! 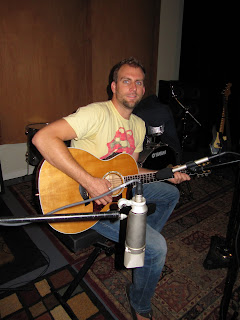 Back again we went into the studio, and once again I was seated, oh so comfy in that large overstuffed leather chair in the control room of Hemispheres Studios. This time, it was acoustic guitar that was the star of the show, so up steps Tony Grimes; my sweet husband and awesome other half of our band Wall of Tom. 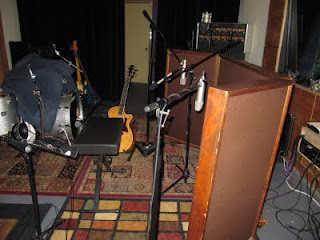 It is so wonderful to get to this part of our album's recording, because this is how it all started anyways... with just me singing and Tony playing acoustic guitar in our living room. The songs began from those very strings of Tony's Taylor Acoustic guitar, and now they will be set in stone from that same guitar, and those whimsical fingers that pluck them. This time of course it is in the controlled setting of a studio with all the proper baffles and wonderful microphones (Neumann U-87's)and once again the great SSL board at Hemispheres Studio. 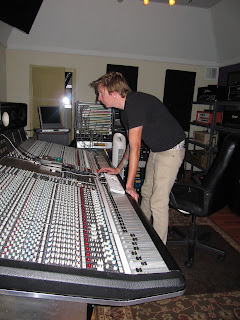 Our friend and recording engineer Brian Fowler stepped behind the desk to record Tony, once the owner of Hemispheres James Lugo had set the session up and gotten the right Mic's in place. It is really fun for me to see Tony get to step out of his norm as the engineer, and get to be the artist... even though I know he went back and forth a few times just to make sure everything was lining up as it should. 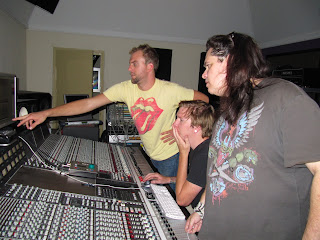 The evening was once again a family affair, and our little boy was rockin' with his Daddy for hours. Our son is getting very comfortable in the studio, and he is so used to hearing these songs- I'm sure he has memorized every word even though he cannot speak them yet. When the music starts playing he will look at me with a big smile on his face as if to say 'Wow, I know this song!' 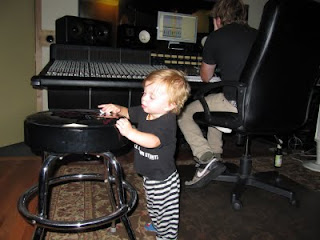 The night went quickly and in six hours, with a break for dinner and play time in between, twelve songs were done. Tony played beautifully, and the richness and warmth of the microphones have done their jobs well. 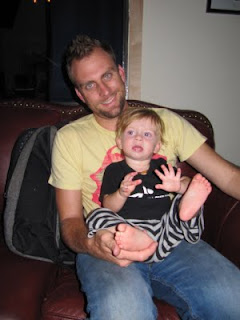 As I placed my passed out child into his car seat to go home, I smiled to myself. What a fun adventure this album has been so far, and to be able to share it with my family is such a special thing. My husband, my child, all of us have been working so hard on creating this album... it is going to be laced with our love from track to track. Next stop on this album train is piano next week, and then violin the following week. Until then...
Posted by Tommie V at 11:41 AM No comments: