Houston, we have a BAND! 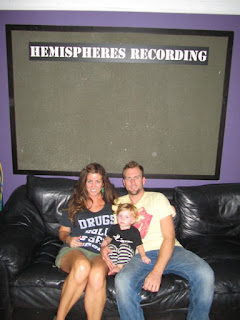 It happened. Somehow in between the happenstance of recording our last album and double parenthood, we had become lost (happily) inside the baby tunnel, and our music took up a smaller and smaller chunk of our lives. At first we didn't notice it, with all the sleepless nights and sweet smiling babies, until maybe a year ago when our daughter turned two and our son four. There was something missing in our lives. Sure we sang songs together, around the house, to our children, in the car, in the shower... but it wasn't filling that gap.

So Tony and I began to play acoustic shows together, just little gigs to get our feet wet, and boy did it feel good. We started to get that old feeling again after every show, that feeling of wholeness, that feeling of being complete. We knew we were onto something, and the memories came back. The feeling of playing in a band, to hear all the aspects of music that were on our albums. So when we were asked to open the show for MommyTonk this last weekend, it was like a calling- or maybe time to make a few calls. 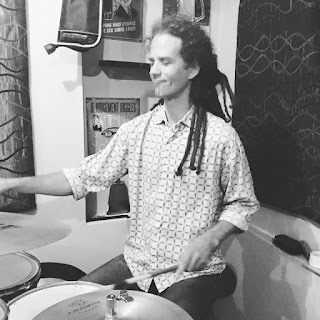 We started with Wall of Tom's original drummer, Kerim Imes. We love this guy, he is part of our musical family and when he said he would love to come up from LA to Santa Barbara and play again, it was like our heartbeat was back. 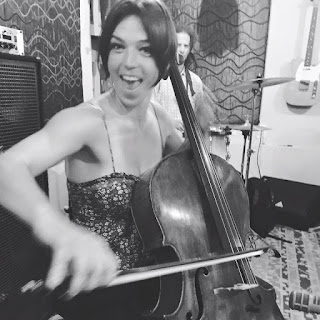 The next call was to a cool gal I had met at a skateboard class last year that both our boys were taking. She had been playing a Uke and we struck up a conversation. We clicked immediately when she told me she was actually a Cellist, but had been so stuck in motherhood (she has four boys!) that her musical life had fallen to the side. Louisa Wood is my new best friend with a foul mouth and a heart of gold, she adds that moody, magical quality of sound that Wall of Tom is known for and we are so happy to have her aboard. 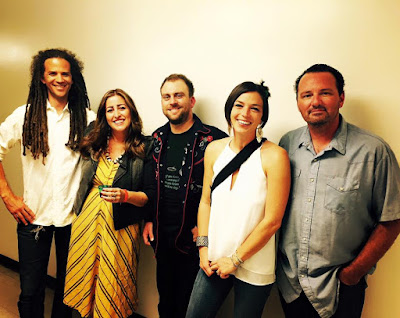 When it came to rounding out our rhythm section we had to divert from our original bassist who was booked for that weekend. We were referred to Brent Harding, who is totally kick ass upright bassist and a super swell fella to boot. Band complete,  we were ready to practice and play the show! 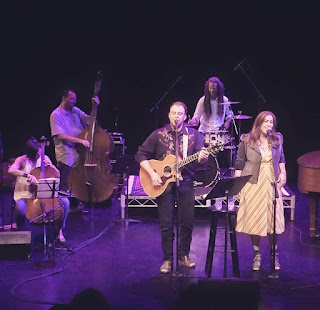 And that we did! It felt divine and sounded amazing, to put it into one word (as one friendly fan did) 'Wizzard'! We weren't sure what the heck she meant, but we think it was a good thing! And that was how it all begins, Houston, We have a BAND!! More shows to come, as soon as these wonderful musicians learn our catalog of music. Wall of Tom is back in action!!! 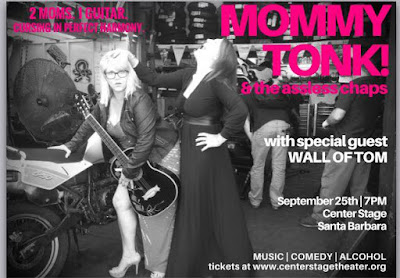 I have to say, being a mommy is one of the nuttiest full time, never catch a fucking break, tough job. It's an up all night, not because you are throwing a great party but because your kid can't stop pukeing kind of job. A get up earlier than rock n' roll possible, to make interesting lunches that you know your kids are not going to eat but some parent at your homegrown co-op may be looking, so you are trying real hard to fool someone. Because you have lived an entirely different type of life for so long that you think you may keel over at 3pm as you are shuttling the kids from school to karate to ballet and the vision of your former self doesn't quite live up to the haggard vision in the rear view mirror who is of course flipping you off but somehow, still smiling right back at you.

This is me, times twenty.

I don't talk much about the struggles of motherhood because, well, so many others do it so much better. I really fly by the seat of my pants on a daily basis and to most straight edge parents, I am doing many, many, many things the wrong way- so I mostly keep to myself when it comes to parenting advice.

Actually, the funniest thing is, I like my kids, a lot- maybe too much because I think they are the raddest little humans I have ever met and enjoy their company better than most adults. We like the same music, laugh at the same jokes, and we love each other unconditionally, even when one of us is being an asshole. After living a life so solopsized on myself, drinking, breathing and bleeding for my Art for 15 years in LA's music business fast lane, I have been able to enjoy this semi-slower (who am I kidding, it's faster and we all know it) mommyland world so much more. Sure, I'm unconventional, my kids stay up late and we have family jam nights on a regular basis, I curse like a proud sailor and both my kids know I'm not stopping anytime soon. I've yelled at them when I am at the end of my patience rope that I 'used to be cool' and they have collapsed into giggles because they still think I'm neat but I'm sure that will change once they become teenagers and realize I need to grow up a bit too.

So speaking of cursing and parenthood, there are a couple cool Mommas coming into town on September 25th, who really know how to say- or sing exactly what all us mothers are thinking on a daily basis. MOMMY TONK is comprised of two amazing ladies who have proven to all of us that you CAN have a family and a thriving stage career, all the while laughing your ass off. 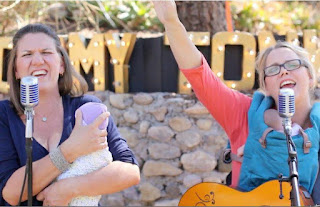 MOMMY TONK is a musical comedy duo based in Los Angeles. Shannon Noel & Stacie Burrows blend their ability to harmonize and curse perfectly in a honky-tonk style. Often called the "Tenacious D for moms," these two ladies rock the house with their irreverent stand up comedy, heart felt storytelling and the prettiest, filthiest music you ever did hear. The ladies are often backed by The Assless Chaps - a fiddle-based variety trio performing American roots music in a country and bluegrass style. MOMMY TONK has performed in LA, Austin, Chicago, Louisville, and Nashville including: The Boston Comedy Festival, The Comedy Store, The Unicorn NYC, Stagecoach Country Music Festival, The House of Blues, and Zanies. MOMMY TONK is not safe for work, children, or basically anyone who has any standards.

I am happy to report that these lovely ladies are playing right here in Santa Barbara at the Center Stage Theatre and myself and my band Wall of Tom is opening the show for them. It's one night only and it's not to be missed- tickets will go fast so buy them early because I plan on yelling this news from the top of the SB courthouse for all to hear.

Get your babysitter lined up, grab your girlfriends or make it date night because Dad's need a break and are gonna love it too. I hope to see you all there- remember parenting is hard, laughing is totally necessary, especially since people kinda freak out when they see us crying all the time. www.mommytonk.com